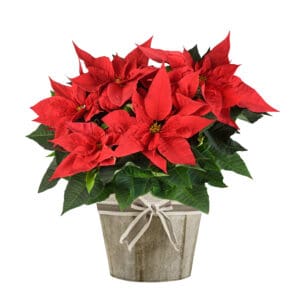 There are many different plants that are involved with making for a cheery Christmas. We hear it in songs, see it on the shelves and even try to sneak kisses under it!

Check out these facts about four plants we all associate with Christmas merriment.

Poinsettia – Also known as the Christmas Star, this is one of the most common plants we see around Christmas. The poinsettia was named after Joel Roberts Poinsett. He was the first U.S. ambassador to Mexico and was also the amateur botanist who introduced the plant to the U.S. in 1825. They symbolize purity, good cheer, and success, and it is said to bring wishes of mirth and celebration.

Holly – There are more than 450 species of holly that grow around the world! Holly has long been used in herbalism and can be used topically and internally to relieve several ailments. Holly’s green, white and red colors represent protection and good luck.

Mistletoe – There really isn’t a clear explanation as to why we kiss under mistletoe because the plant has been linked to several stories and traditions over hundreds of years. According to one tradition, it’s bad luck to refuse a kiss beneath mistletoe! After the kiss, the couple is to pluck one of the berries from the plant. Once all the berries are gone, the bough no longer has the power to command kisses.

We hope your holidays are merry and bright!

Merry Christmas from all of us at 2 Wild Poppies!