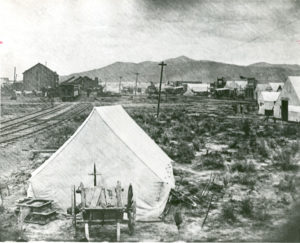 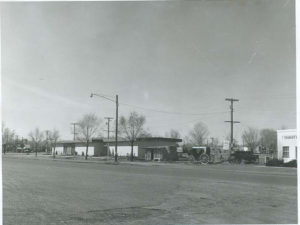 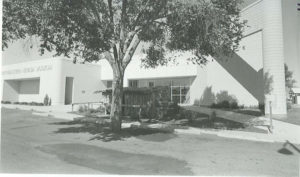 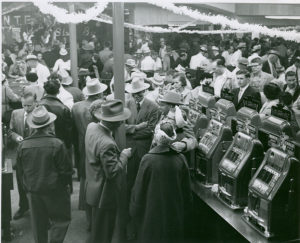 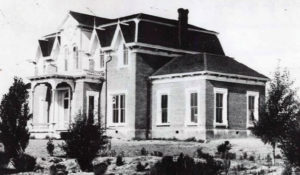 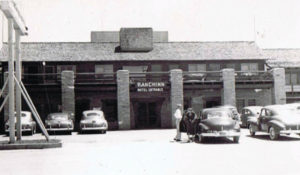 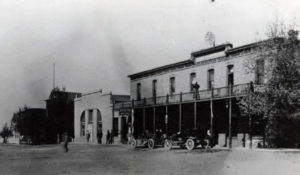 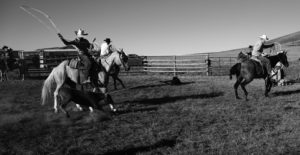 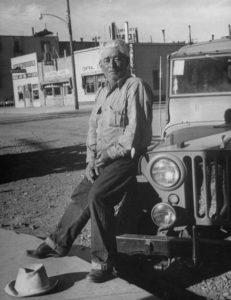 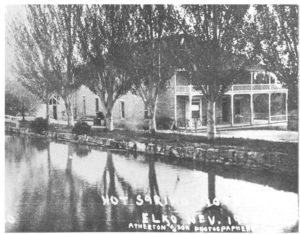 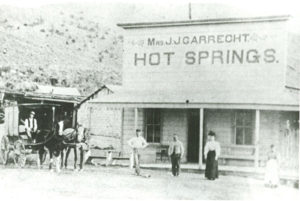 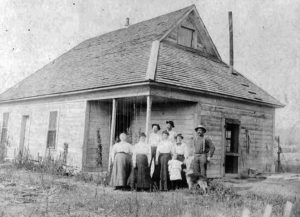 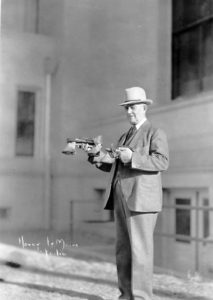 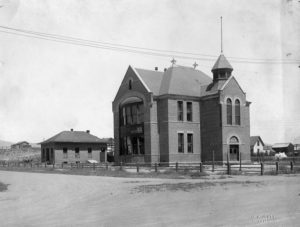 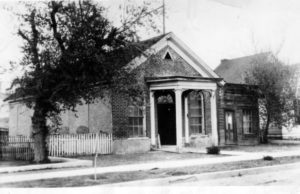 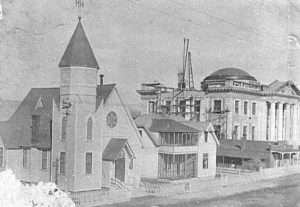 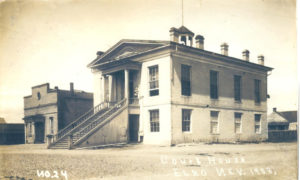 The Central Pacific Railroad was responsible for Elko’s emergence as a town. On December 29, 1868, eastbound railroad workers staked their tents here before continuing on their course to Promontory, Utah. The tent town grew rapidly. Elko was the most convenient railhead in the area for miners and ranchers. Therefore, businesses and homes were quickly built. In January 1869, the Central Pacifi c Railroad sold inside lots for $300 and corner lots for $500. Elko County was established in March 1869 with land that previously made up part of Lander County. The Transcontinental Railroad was completed on May 10, 1869. By June of that year, Elko had grown to a population of 2,000 and lot prices rose to $2,000.

Elko County was established in March 1869. The seat of the county required a courthouse, and so contractor W.P. Monroe’s proposal was accepted at a bid of $17,744. The building was finished in 1870, complete with jail cells in the basement and indoor toilets. It was suggested by the Grand Jury that an outhouse be built out back because the indoor toilets were “a great nuisance and in short will render the lower story of the courthouse unfi t for occupancy.” The contractor also ran into problems with the commissioners because they refused to pay a $240 bill for all of the door locks. In his anger, Monroe distributed spare keys around town and the commissioners were forced to pay $600 to replace the locks. The original Elko County Courthouse stood in the same location as our current courthouse, which was completed in 1911 at a cost of $150,000.Northeastern Nevada Museum Archive Photo 1841-1661-9: Elko County Courthouse 1908. Jail house to the left.

Almost immediately, the residents of Elko expressed the importance of education in the community. In 1870, a school house was erected at 421 Court Street with 70 students in attendance. The need for secondary education prompted the organization of a district high school in 1877. John A. McBride, Elko’s first mayor, was instrumental in founding Elko County High School in 1895; one of the first county high schools in the nation. It was located at Court and 6th Streets. Ranch children boarded during the winter in order to continue attending classes.Elko County High School donated by Mae & Mel Steninger

Joshua Benjamin Fitch was the first Sheriff of Elko County, elected June 21, 1869. He was a pioneer settler, coming to the area in 1868 or 1869.29 One of our most famous deputies, Sheriff Joe Harris, was an Elko native who was elected in 1910 and served 26 years. He oversaw the Jarbidge mail stage robbery and the infamous “cow shoes” cattle thief incident. His son, Jess Harris, was known around the nation as the “Flying Sheriff ” and served 25 years. He was a licensed pilot and used his special talent to conduct his duties when he was called to traverse the large expanse of Elko County. Minnie Guldager Cotant was Elko County’s first lady deputy sheriff, appointed to her position February 24, 1920, under Sheriff Joe Harris. Her first duty was to mind the two female jurors in court case the State v. Miles in which John Miles, along with several other men, were found guilty of stealing more than 1,000 pounds of ham and bacon from the Swift and Co. warehouse in Elko on September 6, 1919.30

The Elko County Sheriff ‘s offi ce is the largest law enforcement agency in the area. Sheriff Aitor Narvaiza currently heads the office, replacing Sheriff Jim Pitts, who was in the position for 8 years prior to the recent election. Since Elko’s founding, 9 offi cers in the Sheriff ‘s Department have lost their lives in service to Elko County.

White Sulphur Hot Springs was established in 1869. The resort, situated a few miles down Bullion Road, boasted the restorative qualities of its warm mineral pools. Several times a day, carriages full of passengers departed the Humboldt Lodging House in downtown Elko and headed toward this retreat, which was later renamed the Hot Springs Hotel. In 1882 and 1889, fires destroyed the building entirely. It was finally rebuilt in brick. In 1916, an earthquake caused the temperature of the springs to increase dramatically, making the waters too hot for comfort. With the loss in customers, the hotel was eventually sold to Elko County in 1919. It was used as a poor house, then as a home for the disabled an d aged until it was finally condemned in 1989 and demolished in 1992.

Basques come from an area in the Pyrenees Mountains between France and Spain. In the mid-to-late 1800s, Basque immigrants in California who found jobs as sheepherders discovered that northern Nevada had a decent range for cattle and sheep ranching. The life of a herder was very diffi cult and lonely. Men were in the wilderness by themselves with very limited supplies for weeks or months at a time.

Some Basque families opened hotels and barrooms. These businesses provided lodging, a mailing address, storage, and unofficial banking for sheepherders. Elko’s oldest Basque house, the Star Hotel, was founded in 1910 and has remained in business for 109 years. The bell still rings each day at 6:15 p.m. in keeping with the old tradition of welcoming tenants to supper.

Basque culture played such a vital role in the creation of Elko’s community that every Fourth of July weekend since 1964, our town hosts the National Elko Basque Festival. People from all over the world come to celebrate Basque heritage in America.

Ranching was introduced to Elko County as early as the 1850s, although in the 1860s and 70s most of the early livestock and agricultural development was in places like Ruby Valley, Pleasant Valley, and Independence Valley. Many of the cattle in Elko County’s early years were driven directly from Texas.

With the completion of the Central Pacific Railroad and the success of mining, agriculture and ranching industries were essential to sustain the growing number of people in the area. Using land fed by the Humboldt River and its tributaries, each ranch adapted to its environment and turned out the necessary products, like hay and grain, to suit their specific needs. Some of the most famous cattle outfits in Nevada history that developed during the 1862-1890 era of immense cattle and sheep range holdings like the Spanish Ranch, Winecup, and Horseshoe are still functioning ranches today.

The Humboldt Lodging House was established in 1869 as a crude, wooden structure. Aside from being one of Elko’s first hotels, it was the precursor to what became known as the Commercial Hotel and Casino. Newton H. Crumley Sr. purchased the Commercial in 1925, and with the help of his son, Newton H. Jr., made it into one of the most successful casinos and entertainment destinations in Nevada.

In 1946, Newt Jr. opened the Ranch Inn Motor Lodge that was located on Idaho Street between Eighth and Ninth Streets. The business was hugely successful and attracted celebrities and travelers from all over the country. Both hotels were sold in 1955, although the Commercial is still operating as a casino today. The Ranch Inn was demolished in 1990.

Elko’s first hospital opened in 1869, on the corner of Third and Railroad Streets complete with 6 beds. Several privately practicing doctors and midwives worked out of their own homes; often they traveled long distances to see patients. People with contagious diseases were isolated in publicly funded pest houses on the outskirts of town. In 1886, when the University of Nevada relocated from Elko to Reno, the abandoned education building was converted into Elko County Hospital.

Before Las Vegas became renowned for hosting big name acts, the Commercial Hotel and Casino in Elko was on the map for bringing famous, live entertainment to northeastern Nevada. In 1941, Newton H. Crumley, Jr. booked popular jazz bandleader and musician Ted Lewis for $12,000 to play a one week stint. Other notable names, such as Lawrence Welk, Sophie Tucker, and Chico Marx were soon to follow. However, job responsibilities did not end on the casino stage. It was contracted that entertainers had to put on a show for the local high school students and perform at other community gatherings. For many years, Elko was the center of amusement for hundreds of miles around.

In 1956, the Northeastern Nevada Historical Society was founded by Edna B. Patterson, Robert Pearce, Dr. Thomas H. Gallagher, and Dr. Morris F. Gallagher. The first meeting consisted of 14 attendees and quickly rose to 70 official members within the year. The primary focus of the group was the preservation of Northeastern Nevada history. One of the Society’s first projects was the relocation of Ruby Valley Pony Express Station cabin to the front of the Museum where it remains standing today. Thanks to the tireless efforts of the organization, the Northeastern Nevada Museum was able to officially open its doors in 1968 at 1515 Idaho Street.

Join us for a Brown Bag History presentation on the founding of the Northeastern Nevada Historical Society in the Museum Theater on December 19th at noon. Bring your lunch and a friend.