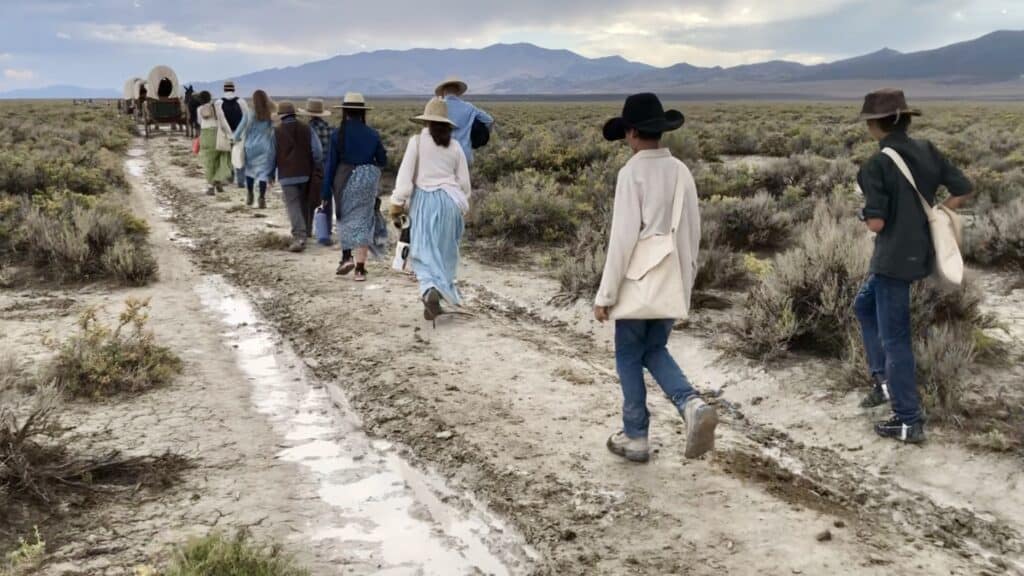 “This is so hard.” – these words characterized the perspective of an eleven-year-old boy I will call John, traveling by wagon and mules on the historic Hastings Cutoff before the recent Oregon-California Trails Association (OCTA) Convention in Elko.  With 29 other 7th and 8th grade students, all wearing clothing of the emigrant period, this adolescent was learning real life lessons on a six-day trek along 64 miles of the Hastings Cutoff between Silver Zone Pass and U.S. Highway 93.  Walking along side five mule-drawn covered wagons, the students braved northeastern Nevada’s arid country, a ferocious wind driven rain and hail storm and the unexpected responsibilities of setting up camp, cooking, and caring for their animals.   Many of the students had not been away from home or their parents before this trip.  It had not occurred to some that they would be cooking for themselves in their assigned groups.  Not knowing how to cook pancake batter, one group threw it out – only to learn that the alternative was beans.  A day later, with their new insight, stew replaced beans on the evening menu.

Under the caring and careful guidance of their teacher, David Vixie, the students learned about teamwork, organization, leadership, communication, and assessment of their efforts.  Throughout the journey, Mr. Vixie shared excerpts from the diaries of the emigrants who had traveled the Hastings Cutoff 180 years ago.  One of these was the diary of the great-great grandmother of one of the students!  The students were expected to write something about their experiences during the day – a series of bullet points as events occurred.  Based on these efforts, the students came to marvel that any of the emigrants had time to journal at all – due to all the required camp chores. When one group of camp tenders decided to eat supper instead of getting tents set up before dark, they learned there was a consequence – a required apology to their fellow travelers for not having set up the tents, an interrupted supper, and the still present need to get the tents set up for all.

During what seemed a terrible storm to the students – caught in the vast outdoors with only shaking wagons and flapping canvas for shelter, some students were fearful and worried.  John said, “this would be unbearable if it wasn’t for Mr. Vixie.”

The support of sixteen other adults who helped with a wide range of tasks and provided a largely invisible 21st century safety net was an important part of this endeavor.  Kinross Gold Mines – Bald Mountain (White Pine County) provided key financial support for this remarkable educational experience.  In kind support, including camp locations, was provided by Nevada Gold Mines. Support was also provided by the California Trail Heritage Alliance, a non-profit based in Elko NV.

Despite the strangeness of the outdoor classroom and its associated learning challenges, the students were awed by the vastness of this part of Nevada, the beautiful sunsets, and the fantastic splendor of a star-filled sky undiminished by city lights.

After coming off the trail, the students made a presentation to over 200 attendees at the OCTA Convention in Elko about their experiences and visited with convention attendees.

OCTA is the largest national organization promoting protection and preservation of historic trails in the U.S.  There are over six hundred miles of historic trails in Elko and White Pine Counties, including the California Trail, the Hastings and Greenhorn Cutoffs, the Central Overland Trail and the Pony Express Trail.  For more information, contact helenhankins@gmail.com.