Skip to Content
Home Education Antelope Bitterbrush: Food For Many

Kylie Leave a Comment on Antelope Bitterbrush: Food For Many 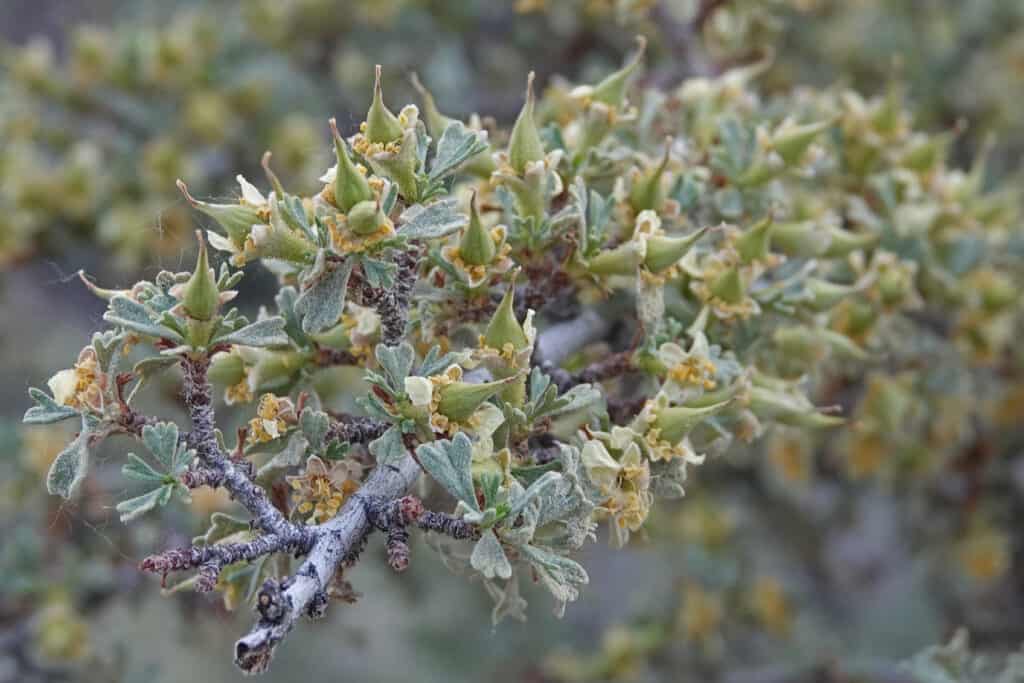 Bitterbrush is a shrub in the rose family that grows from 4.5 ft. up to 10 ft. in ideal conditions. It can be found at elevations of 4,000 to 9,500 ft. and is found in every county in Nevada.  In southern Nevada it is limited to along perennial streams and higher elevations. It grows in mixed shrub habitats and is often found with sagebrush. The scientific name, Purshia tridentata, refers to the three lobes found on the end of its small leaves. The leaves are a dark green, have fine hairs on the top, short white hairs underneath and the edges are slightly curled under. The majority of the leaves will drop before winter.  .

Bitterbrush is well adapted for life in the Great Basin. The almost leathery leaves help it retain water and the long tap root (over 16 ft.) reaches deep into the water table. This is deeper than sagebrush which also has leaves with three lobes but has thinner grayer leaves. The roots are typically covered with mycorrhizae, small roots infected with fungi. These fungi replace root hairs and are vital for absorbing water and nutrients from the soil. They also have been shown to supply growth hormones, chlorophyll content and possibly some disease resistance to the host plant.

Bitterbrush leafs out in the spring but it will not be mature enough to produce flowers and seeds until when it is about 10 years of age. The pale yellow flowers are tiny, usually less than ½ of an inch. Depending on elevation the shrub will bloom from early spring to July. These blooms are important to our native bees. Each pollinated flower will produce fruit, which is a small single seeded leathery structure. This fruit falls to the ground without releasing the seed. The dried parts of the flower usually remain attached. It has been found that these dried flowers contain a germination inhibitor. This means the seeds need to be transported in order for a new plant to grow.  Desert rodents such as the Great Basin pocket mouse will carefully remove the flower parts before they cache the collected seeds. In the spring the rodents will return to their caches and eat the cotyledons, the first leaves that sprout from the seed. It has been determined that these seeds require a cold, dormant period (winter) in order for them to germinate.

This shrub reproduces both by seed and by its stem layering. This occurs when the lower branches that make contact with the ground develop roots. Over time the new section will lose contact with the original plant. This type of growth is most common at higher elevations where the shrub grows in a shorter more prostrate form.

Studies show that the carbohydrate content of the leaves decline in spring and this continues through the growing season. In late summer until the leaves drop they build up carbohydrates. The full common name of antelope bitterbrush show its importance as a browse food for wildlife and livestock. The amount of crude protein in the leaves can be as high as 14% in early summer.  Deer, antelope, and bighorn sheep all rely on bitterbrush for forage. The seeds will be eaten by rodents, ants and birds. Recently on a drive to Soldier Canyon we watched a small flock of bushtits as they flitted among the bitterbrush eating as they went.

The Northern Paiute name for bitterbrush is hunabi. It is well documented for use as a medicine. Both Paiutes and Shoshone boiled the leaves and drank it for stomach ache or constipation. “It makes them vomit and move the bowels”. It was also used as a cure for venereal diseases. The green leaves would be mashed and applied as a wet dressing for sores or the dried leaves were dusted as a powder. Root teas were used for coughs, lung infections and fever.