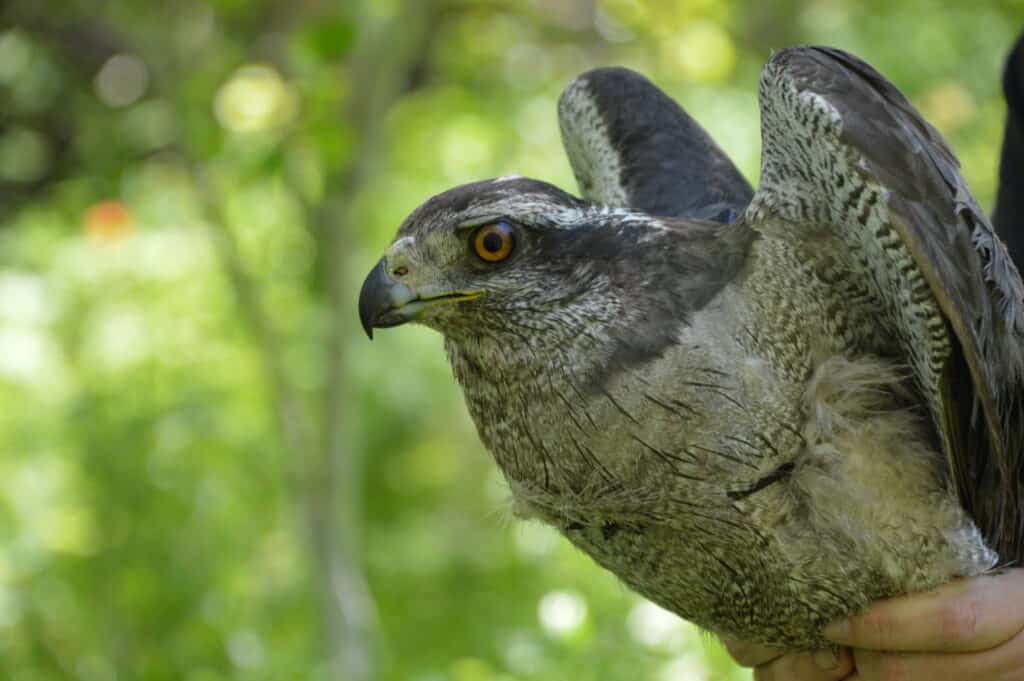 Submitted by Mackenzie Jeffress for Bristlecone Audubon Chapter with photos by NDOW staff.

Often when I tell people that I am a biologist for the Wildlife Diversity Division for the Nevada Department of Wildlife, I have to follow-up with an explanation. The reason? Nevada is home to over 600 wildlife species and only a few dozen of them are game animals, meaning the remaining several hundred species are not hunted, including a variety of songbirds, bats, rodents, snakes, lizards, and more. Some of these species live in very isolated and remote parts of the state, while others might be common in your backyard. That’s where I come in. The Nevada Department of Wildlife is tasked to protect, conserve, manage and restore wildlife and the Wildlife Diversity Division is responsible for the nongame part of that.

Every day of my job is different, which is maybe what I love about it most. From winter bat surveys focused on disease surveillance and hibernation counts, to setting out hundreds of aluminum live traps for small mammal inventory surveys—almost every day brings me into a different part of Nevada, studying a different species. But a project I am looking forward to again this spring is our Northern Goshawk study in northeastern Nevada.

I imagine most people in the Elko area are familiar with golden eagles and maybe that red-tailed hawk you see perched on the power pole on your way to work, but the Northern Goshawk—Accipiter gentillis—is not as familiar, partly because despite occurring across forests in North America, Europe, Africa, and Asia, it isn’t particularly common nor is it obvious, spending much of its time quietly stalking prey in thick deciduous and coniferous forests. However, ounce for ounce, this bird is probably the most agile and fiercest of raptors in Nevada, zipping through the trees and on the forest edge, aggressively hunting for birds, like woodpeckers and jays, and small mammals like ground squirrels. Adult Goshawks are a silver-gray with a white eyebrow and startling red eye.

Although they can be stealthy, Goshawks have an intimidating and screeching alarm call that they can use to scare you from their nest. And this is often how I look for them. Late spring into early summer I walk through the forest and play goshawk calls from a speaker to try to get a response from nesting birds. When I find an active nest, I look for nestlings and determine how many and their age. In some cases, we come back to the site to trap an adult and put a transmitter on it. The process is fun work, where we string up a fine net near the nest and use a mounted owl as our lure. The adult Goshawks are so protective and worried that the owl might harm their babies, that they swoop in to attack the owl and end up caught in our net. Once we have the bird, we untangle it and quickly place a hood over the head and eyes to calm it down. We take some quick measurements and then attach the transmitter, which is about the weight of a few coins, on its back, similar to a backpack. The transmitter is solar power and provides the bird’s location throughout the year by using a GPS and satellites. Within a few minutes, the bird is released and happy to get back to the nestlings.

So, you might ask, why go to these lengths for just one bird species? Some studies have found that half of the world’s raptor populations are in decline—and when a species like this is impacted, it’s often a good indicator of larger environmental concerns. In Nevada, Goshawks have special protection designations from the State, U.S. Forest Service, and Bureau of Land Management, which certainly helps with conservation. But our knowledge about the Goshawk, including its movement patterns between summer and winter, and its unique habitat associations, is limited. Before this study we knew they are most often found nesting in the aspen woodlands in the Nevada (think Jarbidge Mountains and East Humboldts) but not much about where they moved outside of the breeding season, particularly in the winter months. We were not sure if our birds migrated and if so, were these large migrations that many other raptors follow or smaller distance migrations? And what features of the landscape might the birds be drawn to?

Our first transmitter went out in 2017 and the data is being analyzed by a graduate student in Utah. This information helps us understand how to best protect this sensitive species and what actions might be benefiting or negatively affecting it. That, and the data collected during these surveying efforts allows us to determine the daily movements of the birds, the size of their home range, and types of habitats they are using at different times of year. Data from these studies can also cue us in on new nest areas, when Goshawks are showing up to nest, how they move in and out of the area if habitats are impacted, and more.

The next time you are out and about in the Elko backcountry, give that large bird you see from afar a double take… it might just be a Goshawk. For me, they are one of the most regal of all raptors and we should be grateful for them being part of the Nevada wildlife story.

To learn more about our area’s birds, plants and other wildlife follow us on Face Book at Bristlecone Audubon. Contact us at bristleconeaudubon@gmail.com if you would like to receive our digital newsletter.