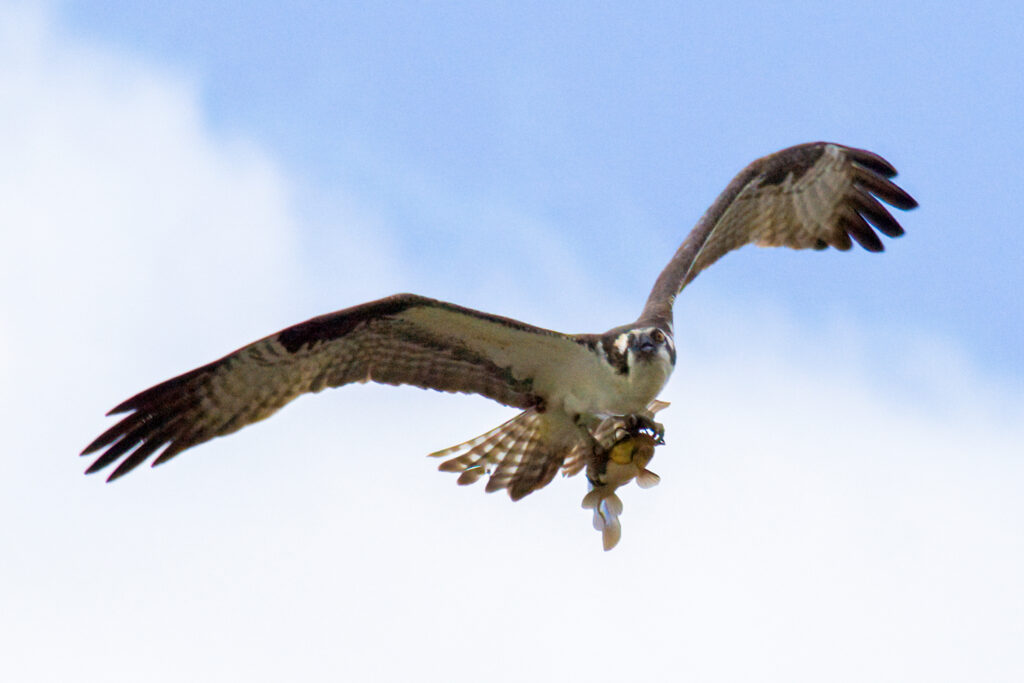 The osprey is a very distinctive fish-hawk, formerly classified with other hawks but now placed in a separate family of its own. The osprey differs in several respects from other raptors. Its toes are of equal length, its foot bones are marked with a net like pattern, and its talons are rounded, rather than grooved. The osprey and owls are the only raptors whose outer toe is reversible, allowing them to grasp their prey with two toes in front and two behind. They also have barbed pads on the soles of their feet which helps them grip slippery fish. When flying with prey, an Osprey lines up its catch head first for less wind resistance. An osprey weighs between 2 to 4.6 pounds and has a 50 to 71 inch wingspan (similar in size to hawks such as the red-tailed hawk).

The osprey is unusual in that it is a single living species that occurs nearly worldwide. It is found on every continent except Antarctica. There are four generally recognized subspecies, although differences are small. There is only a total of 6 land-based birds that have a worldwide distribution. Most of the birds that breed in North America are migratory, with some non-migratory individuals in southern Florida, the Caribbean, southern California, and the Baja Peninsula. Individuals typically migrate singly. Most Ospreys that breed in North America migrate to Central and South America for the winter, with migration routes following broad swaths of the eastern, interior, and western U.S.

The osprey is the only hawk on our continent that eats almost exclusively live fish. In North America, more than 80 species of live fresh- and saltwater fish account for 99 percent of the osprey’s diet. Captured fish usually measure about 6–13 inches in length and weigh one-third to two-thirds of a pound. The largest catch on record weighed about 2.5 pounds. On very rare occasions, ospreys have been observed feeding on fish carcasses or on birds, reptiles and rodents. Ospreys probably get most of the water they need from the flesh of their prey, although there are reports of adults drinking on hot days.

Ospreys have vision that is well adapted to detecting underwater objects from the air. Prey is first sighted when the osprey is 33–131 feet above the water, after which the bird hovers momentarily then plunges feet first into the water often completely submerging their entire body. They can only access about the first 3 feet of water so it feeds mainly on surface schooling fish and fish found in shallow water. As an osprey dives it adjusts the angle of its flight to account for the distortion of the fish’s image caused by the water’s refraction. Ospreys will typically eat on a nearby perch, but have also been known to carry fish for longer distances.

Historically, the Osprey built its bulky stick nest atop trees, rocky cliffs, promontories, and even on the ground on a few islands that lack mammalian predators. While some continue to use natural sites, many have shifted to nesting on artificial structures. The species now uses many artificial sites: channel markers in harbors and busy waterways; towers for radio, cell phone, and utility lines; and platforms erected exclusively for the species. This shift has been dramatic in many regions, with 90–95% of pairs choosing to nest at artificial sites; predation, loss of trees, and development of shorelines have been driving forces behind the change. Whatever the location, Osprey nesting habitat must include an adequate supply of accessible fish within about 12 miles of the nest; open, usually elevated nest sites free from predatory mammals such as raccoons, and a long enough ice-free season to allow the young to fledge. Osprey nests are built of sticks and lined with bark, sod, grasses, vines and algae. The male usually fetches most of the nesting material—sometimes breaking dead sticks off nearby trees as he flies past—and the female arranges it. Later in the nesting season all kinds of objects are delivered to the nest including paper and plastic bags, rope, nylon mesh bait bags, dried cow manure and beach toys! Nests on artificial platforms, especially in a pair’s first season, are relatively small—less than 2.5 feet in diameter and 3–6 inches deep. After generations of adding to the nest year after year, ospreys can end up with nests 10–13 feet deep and 3–6 feet in diameter—easily big enough for a human to sit in.

Adept at soaring and diving but not as maneuverable as other hawks, ospreys keep to open areas, flying with stiff wingbeats in a steady, rowing motion. Primarily solitary birds, they usually roost alone or in small winter flocks of six to ten. Nesting ospreys defend only the immediate area around their nest rather than a larger territory; they vigorously chase other ospreys that encroach on their nesting areas. In breeding season, males perform an aerial “sky-dance,” sometimes called “fish-flight.” With dangling legs, often clasping a fish or nesting material in his talons, the male alternates periods of hovering with slow, shallow swoops as high as 600 feet or more above the nest site. This display can last for up to 10 minutes or more, the male utters repeated screaming calls while gradually descending in an undulating fashion to the nest.

Osprey are typically monogamous with the mated pair returning to the same nest year after year. The female osprey lays 1 to 4 eggs with the first egg being considerably larger than the subsequent eggs. The eggs do not hatch all at once with the first chick emerging up to five days before the last one. The older hatchling dominates its younger siblings, and can monopolize the food brought by the parents. If food is abundant, chicks share meals in relative harmony; in times of scarcity, younger ones may starve to death.

To learn more about our area’s birds, plants and other wildlife follow us on Facebook at Bristlecone Audubon. Contact us at bristleconeaudubon@gmail.com if you would like to receive our digital newsletter. Special thanks to my son, Roger Ports for his osprey photos.