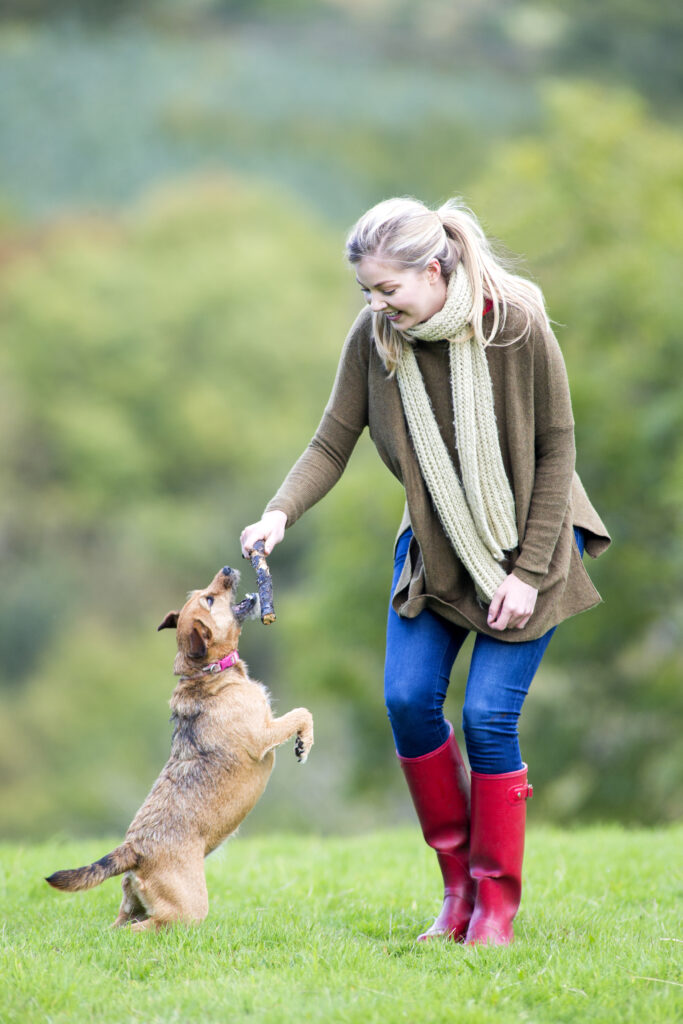 National Dog Bite Prevention Week takes place during the second full week in April each year, and its focus is to educate people about preventing dog bites. There is an estimated population of nearly 77 million dogs living in U.S. households and millions of people– most of them children– are bitten by dogs every year. The majority of these bites, if not all, are preventable. In 2017 there were nearly 350,000 people treated at hospital emergency rooms for non-fatal dog-related injuries. Of those people, there were nearly 10,600 children two years old or younger who visited emergency rooms as a result of dog bites. In 2018, insurers paid $675 million in claims related to dog bites, according to estimates from the Insurance Information Institute.

We want to share with you some recommendations to help avoid common situations that may increase the chances of a dog bite to humans or to other animals. Many dog bites can be prevented by understanding the signals animals give when they are becoming anxious or agitated. Some of these are very straightforward, but others may surprise you. The vast majority of dogs will show subtle signs that they are uncomfortable well before they resort to biting. Most likely to be bitten are children and seniors. Children are much more likely to be bitten due to differences in impulse control and ability to understand signs that the dog is becoming increasingly uncomfortable. According to the American Veterinary Medical Association, bites most commonly occur with familiar animals and can happen due to a variety of reasons.

The Dog May Bite If It Is Ill or In Pain

This is the first thing to rule out when an animal has behaved aggressively, especially for the first time. Some types of pain and illness are obvious; however, many animals hide their pain relatively effectively. Chronic pain from osteoarthritis can be hard for owners to notice as they live with the animal and see it on a day-to-day basis. Age-related changes such as declining eyesight and hearing can also make sudden petting or interaction more startling. Combine either of these changes with a toddler who may approach rapidly and not-so-gently pet an older animal’s sore hips or back, and you have a recipe for potential pain and fear-related aggression.

The Dog May Bite If It Is Afraid

Animals can develop fear and anxiety at any point in their lives. Although some animals have a history of neglect or trauma, this is not required for them to exhibit fearful/anxious behavior and aggression. Some common signs of anxiety in dogs/cats can include: attempting to remove themselves from the situation, avoidance of eye contact, licking their lips or yawning, drooling, lowered ears, tucked or lowered tail.

The Dog May Bite If It Is Protecting Someone Or Something

Some animals will develop aggression related to resource guarding or protecting humans or things (toys/food/etc). This too can develop at any time throughout their life. Always be alert when feeding or interacting with an animal.