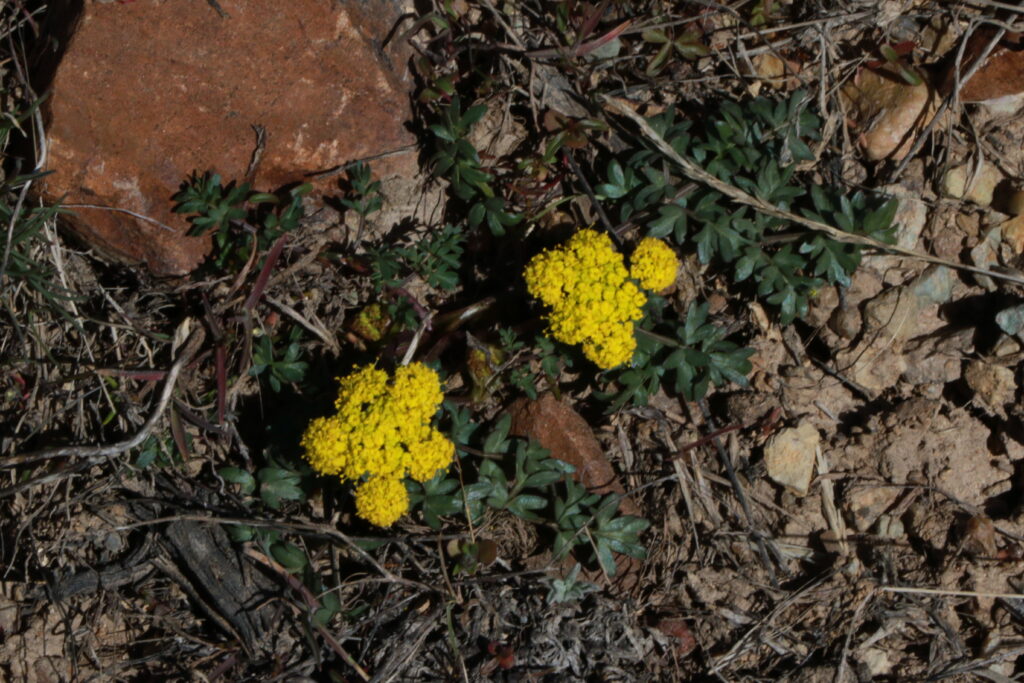 Colorful Signs of Spring in the Sagebrush Steppe

The sagebrush steppe ecosystem of the western United States might seem to be an arid and monotonous expanse of sagebrush and grasses as we drive by on the highways of northeastern Nevada. In reality it is one of the most widespread ecosystem types in the United States teeming with wildlife (more than 350 vertebrate species). It is a key habitat for declining flora and fauna such as the greater sage-grouse and the pygmy rabbit. As the snow melts off of the high cold desert one can also find a colorful feast for your eyes if you take the time to look.

If you take a walk through areas dominated by sagebrush such as the Adobe Hills where all these photos were taken you will discover that the ground has patchworks of color.  These flowers are easily over-looked because many early spring flowers tend to be small and close to the ground. Some people call them belly-flowers since you have to get down so low to see them.

Cous biscuitroot, Lomatium cous, a perennial with parsley like leaves is sometimes called desert parsley. A cluster of yellow flowers blooms at the end of each branch. Stems of this plant often have a rosy cast. The leaves of this plant are eaten in early spring by wildlife including sage-grouse. Native Americans used the tuberous roots which were dug in early May and eaten raw, boiled, or sun-dried and made into flour.

The bright yellow blooms of the sagebrush buttercup, Ranunculus glabberimus, are easy to find. They grow on dry soil in sunny locations, often at the base of sagebrush.  They are also common in Spring Creek yards since that whole area once was covered in sagebrush. The flowers have a shiny, smooth appearance and seem to glisten in the sun.  But don’t be fooled by its beauty, it has some toxic properties. The flower contains an acrid oil which if ingested can damage the liver and kidneys and can blister the mouth.  But when the plant is dried or cooked it loses its toxicity and can be very beneficial. Historically the dried plant was used to relieve the pain of arthritis and bruises.

Bluebells, Mertensia longiflora, are among the early blooming flowers of the sagebrush steppe but it can be found in many other types of habitats.  The leaves have a bluish tint, are slightly hairy and appear leathery. The petals are fused into a narrow tube with five lobed tip. The blooms tend to be nodding and have a bell like appearance. The flowers are blue but fade to pink with age. They are found frequently under sagebrush and other sheltered sites.

Dwarf hesperochiron, Hersperochiron pumilis, has no easy common name. These plants are thick-rooted and tend to grow in seeps and meadows within the sagebrush steppe. The blueish white flowers have 5 petals and yellow throats. It is a member of the waterleaf family and like most members of this family it has leaves which are coated with tiny hairs. The leaves form a basal rosette below the flower which grows from a short leafless stalk.

The grass widow, Olsynium inflatum, is a member of the iris family. It is often among the first flowers to bloom in the sagebrush steppe.  It has clusters of grass-like leaves. The flower stems are topped with 1 to 4 pale purple, pink or white flowers. The petals are narrow and pointed, the stamens are a bright yellow. By the time true grasses have come out the flowers have fallen and the leaves of this plant can be hidden among the similar appearing grasses.

There are over 300 species of phlox native to North America. Many of the species found in the sagebrush steppe are quite showy but one of the earliest bloomers is the tiny slender phlox, Microsteris gracilis. Its maximum height is only 20 centimeters but our early blooming plants tend to be much smaller. The plant in the photo is less than 1 cm tall with leaves that measure only a few millimeters long. The flower has a yellowish tubular throat with pink petals. The stems are covered with minute hairs. The larger forms of this plant make good forage for wildlife including sage-grouse.

To learn more about our area’s birds, plants and other wildlife follow us on Facebook at Bristlecone Audubon. We do have a spring bird field trip along Lower Lamoille road planned for Saturday, May 8, 2021, for those who are interested. Contact us at bristleconeaudubon@gmail.com if you would like to receive our digital newsletter or would like more information about the field trip.