Contributed by Lois Ports for Bristlecone Audubon Chapter with photographs by Gretchen Baker.

Nevada designated the bristlecone pine as an official state tree in 1987 (single-leaf piñon was the first tree symbol of Nevada, adopted in 1953). Bristlecone pine trees are considered the oldest non-clonal trees in the world. The oldest known living bristlecone pine tree, Methuselah, is 4,852 years old and is located in the White Mountains in Inyo County of Eastern California.

This tree called Prometheus was growing on Wheeler Peak (now part of the Great Basin National Park). This tree was cut down in 1964 by a graduate student and United States Forest Service personnel for research purposes. Those involved did not know of its world-record age before the cutting. 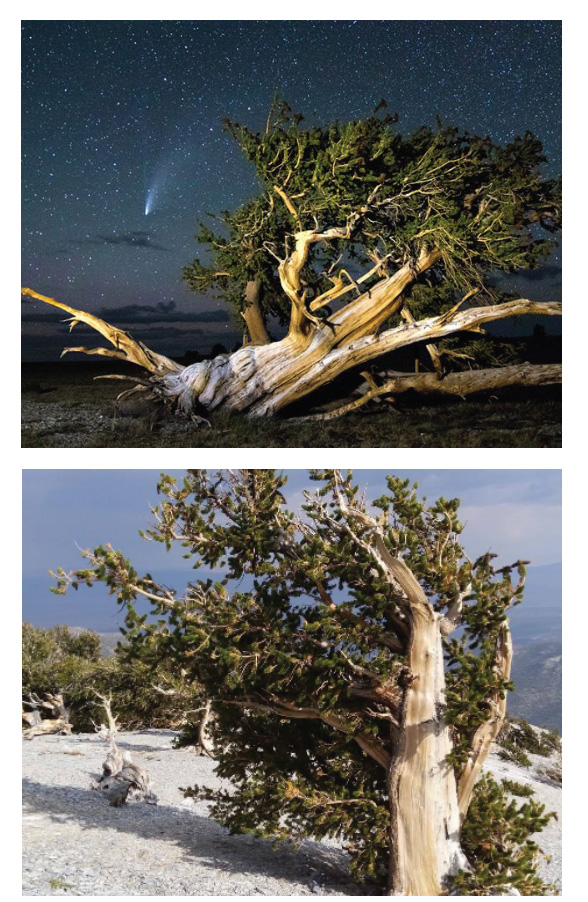 Bristlecone pine trees are typically considered a timberline tree found from 9,000 to 11,500 feet in elevation. There are some stands of bristlecones below this elevation with a record of a single tree in the Snake Range at 5,800 ft. Capable of growing to heights of 60 feet or more in protected areas, most ridge top trees rarely exceed 15 to 30 feet in height. It often grows on exposed ridgelines where the tree takes the brunt of wind-blown sand and ice crystals. Bristlecones in some areas can experience average monthly temperatures below freezing from November through April. Even in the warmest months this high elevation tree exists in areas that average highs of only around 50°F. In general, precipitation in these areas falls mostly as snow and total precipitation is low averaging around 12 inches.

The tree’s short, green needles are in bundles of five and grow densely along small branches about a foot in length. The needles of the tree surround the branch giving it a bottle-brush appearance. Most conifers have pine needles that live only for a few years but the needles of the bristlecone can remain on the branches for up to forty years.

Bristlecones can reproduce successfully by seed in spite of the hardships of their environment. Pollen is shed from mid-July to early August. The developing female seed cones are deep purple which helps them absorb the sun’s warmth which may help mature their seeds. Cones open and shed their seeds in late September and early October. At Wheeler Peak in the Great Basin National Park trees that are over three thousand years old continue to bear cones. The name bristlecone pine refers to the dark purple female cones that bear incurved prickles on their surface.

In very old trees there is often only a narrow strip of living tissue that connects the roots to a handful of live branches. While other species of trees that grow nearby suffer rot, bare bristlecone pines can endure, even after death, often still standing on their roots, for many centuries. Rather than rot, exposed wood, found on living and dead trees, erodes like stone due to wind, rain, and freezing, which creates unusual forms and shapes.

Since diameter growth continues throughout life they can have massive trunks. It is estimated that they grow about an inch in diameter every 100 years so the wood is extremely dense. Trees growing in thin soils on ridgelines are especially sensitive to drought and during these times form a narrower than usual ring that year. Because of this sensitivity bristlecones are a valuable asset to the science of dendrochronology. Long sequences of these climatically sensitive tree rings allow researchers to make inferences about past climates. The analysis of old bristlecones and even sections of wood from long-dead trees has allowed such inferences to extend over nine thousand years into the past. Wood taken from rings of known dates have also been used to help calibrate the radiocarbon dating curve used by archeologists.

The oldest bristlecone tree was actually cut down in 1964 while it
was still alive at the ripe old age of 4,900 years!

It is not totally known why the Great Basin bristlecone pine lives so long. The wood is very dense and resinous and this helps provide resistance to invasion by insects, fungi and other potential pests. The trees are more widely scattered resulting in less competition. Less vegetation means fewer fires entering the stand. It is not understood whether these ancient trees finally just wear out but eventually it would lose its anchorage through exposure of its roots by soil erosion.