We have made it through the long cold days of winter and soon the vernal equinox will be here (March 19). With it comes thoughts of warmer temperatures and longer amounts of daylight. Three of our smallest birds have been seen frantically feeding at bird feeders all winter to maintain the required energy to survive. They too will be glad for spring’s arrival.

The Ruby-Crowned Kinglet moves down from the mountains into the valleys during the winter. It breeds in the higher elevation spruce and fir forests of northern and mountainous western United States and Canada.

The Ruby-crowned Kinglet is a very small olive-green songbird (9–11 cm long, 5.0–9.7 g). Both sexes have olive green-gray on upperparts with 2 strong white wing-bars and a broken, white eye-ring. Underparts are dusky white. Male has scarlet crown patch, generally concealed. Female identical to male but lacks the crown patch. This bird has a remarkably loud and rich song which is heard primarily on breeding grounds, but they are also known to sing on wintering grounds and during spring migration. Most birding guides will refer to the repeated phrase of deeter-deeter-deeter but to me I always seem to hear them call teacher-teacher-teacher. Must be all those years of teaching elementary students. For such a small bird it is noteworthy that it will lay up to 12 eggs, which is the largest clutch of any North American songbird of its size. Although the eggs themselves weigh only about a fiftieth of an ounce, an entire clutch can weigh as much as the female herself. During the winter they will feed on seeds and small fruit but the majority of the year they forage on spiders and insects. 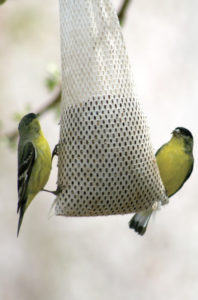 The Lesser Goldfinch is found throughout Nevada’s urban areas but are more common on the western side of the state. They are the smallest of the goldfinches (9-11 cm long, 10 g). Adult males are yellow below with a glossy black cap and white patches in their wings. Their backs can be solid black but typically west of the Rocky Mountains they are a dull olive green. They maintain the same plumage year around. The females have olive backs, dull yellow underparts, and black wings with white wing bars and a white rectangular patch on the edge of the wing. Lesser Goldfinch song has been described as a series of grating notes interspersed with clear warbles and squeals. They feed on seeds, flowers, buds, fruits, and infrequently very small insects. Lesser Goldfinches usually feed in small flocks moving through a patch of weeds, each bird clinging to and feeding from a different plant. They remove the seed coats with their bill, shake their head to loosen the husk, and swallow the seed. They often perches next to seed heads, often bending stems horizontal and sometimes hanging upside down to reach over to seeds.

Flocks of tiny Pine Siskins may monopolize your thistle feeder one winter and be absent the next. This nomadic finch ranges widely and erratically across the continent each winter in response to seed crops. Flocks are gregarious, and you may hear their insistent wheezy twitters before you see them. Their most recognizable call is an upsweeping zreeeeeeet lasting most of a second. These small birds (11-14 cm long, 12-18 g) are heavily streaked with brown and their wings are edged with yellow and the notched tail also has yellow. They breed in coniferous or mixed coniferous-deciduous forests. They eat seeds of a variety of annual plants, notably composites and grasses, and small seeds of various trees, including an assortment of conifers and deciduous species such as alder and birch.  Pine Siskins are well adapted to clinging or hanging from cones, seed heads, or the end of branches. They also will eat tender buds of various deciduous trees, as well as the soft stems and leaves of forbs. They actively forage for insects and spiders.

Due to their small size and their tiny conical bills all three of these birds tend to prefer nyjer or thistle seed at bird feeders. They may hang around whole sunflower seed feeders if heavier-billed birds are messy eaters and drop seed bits. Dandelion seeds attract both Pine Siskins and Lesser Goldfinches. They hop on the white seed heads, bending them to ground where seeds could readily be extracted. Of the three, the Ruby-crowned Kinglet is the hardest to focus on whether using binoculars or a camera.  They seem nervous as they flit through the foliage, flicking their wings nearly constantly. Keeping an eye out for this habit can be a useful aid to identifying kinglets. The other two are especially easy to identify when they are feeding.

To learn more about our area’s birds, plants, and other wildlife follow us on Facebook at Bristlecone Audubon and contact us at bristleconeaudubon@gmail.com if you would like to receive our digital newsletter. Our next meeting will be held at Great Basin College on Friday, March 13, 2020 at 7:00 p.m. in room 208 of the DCIT Building. Gerald Miller will be speaking about Nevada’s Trees and Shrubs. Everyone is welcome.