What brings you to Elko?

Our Step-Aunt Billie Hackwell has been trying to get us here for years. The opportunity showed up when we performed for the grand opening of The Stage Door in Elko, NV. We fell in love with the area and we’ve never left. It’s safe, people are kind-hearted and we keep finding folks who want to help better the world around them, not destroy it.

A community like that, is our type of community! Recognizing no matter the age, education level, cultural background or the economic status of an individual; everyone is important and has a special place on this planet. Otherwise, they wouldn’t be here! There are leaders in the healing industry here and that’s what we are all about. Performing to help bring people together as a community, help heal hearts through song, comedy and artistic illusion as well as become involved with local needs. Our goal, is to give back to the community we live in, through the gift of music and comedy. When we travel we will take everyone with us. When we are home, we will bring the love of others back to Elko & Spring Creek!

How did you both get started in music?

Clint Kenneth: “I was raised in a musical family. I started singing with my Grandmother Zona Staten, who was a music teacher and with my uncles during family gatherings, holidays and throughout my upbringing. At five years old, I performed a solo at the church and in elementary school I started impersonating my fellow peers & teachers to help make people laugh. The principal found out about what I could do and called me into the office. He thought it was hysterical. From then on, I’d be asked to entertain the school staff during their breaks and while at recess large groups of kids would gather around me to be entertained. I never stopped my studies in the art of impersonation and my love of music continued to grow. I found great joy in bringing people music and laughter. There was always music flooding the walls of my home, my mother Norma Gene Ingbretson would sing and dance in the kitchen while making dinner. Watching her fill our house with the perfect combination of love and music, made me want to do the same thing.

Ila Selene: “The meaning of my name is ‘an island’. My middle name means ‘moon goddess’. It’s funny how my existence is a reflection of those names. Living on Camano Island in Northern WA next to a Native American reservation, we were in the forest. My mother, Linda, describes my first 9 months on Earth as surrounded by nature, playing in nature and interacting with folks when we made it into town. Eventually we sold that piece of land, but stayed in the general area in a new mobile home. We didn’t have electricity for a while, so lots of crafts, outdoor time, creating beats and music with our hands and whatever was around and general creativity in our family of 7. I suppose you could say the music I began to write and sing was organically influenced by the life around me. Electricity came and that meant my eldest sister was given a record player, which I thought was amazing! Boy I loved to dance with my mother and sisters. A beautiful upright piano appeared and all three of us younger ones jumped at the chance to play it. Then I saw my first play…my eldest sister in her high school play. I thought… I want to do THAT. Like I said, Moon goddess is my middle name and because of many abnormal health challenges along the way, I have spent much of my time away from the sun and outdoors. Music became a way for me to escape, then loose myself, eventually it was cast aside in anger for two years only to become a part of my major healing later in life. But that’s another story!” 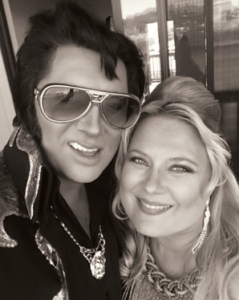 TOGETHER As a Team: We both had been singing in our own bands and solo projects. We’d both done various commercials, radio spots, public relations, had careers in caregiving, landscaping, event planing, production & opened for big name talents. We crossed paths without knowing it for about 17-20 years. Then we re-met for the last time when the Elvis by Clint, CI Show Band (a ten piece traveling band) was in need of a back-up singer who could hit the Kathy Westmoreland high notes. We’ve not parted since that day. Slowly, we figured out how many times we’d met or seen each other over the years. We just laugh about it now! Our musical passions range from 1920’s to now-hits. That way, we get to mix it up to fit the need of the audience and get to continue to grow in our own creativity. That musical selection mixed with Clints’ make-up artist talent, method acting and vocal impersonations means we & the audience get to travel through time together! We enjoy so many musical legends and are very blessed we are able to sing their music to keep their legacy alive. Simply put… it makes people happy. and that makes us happy.

Do you have plans for the future here in Elko?

We want to be an intricate part of this beautiful community. We have already been fortunate enough to have met various artisans, The Elko Chamber, local business owners & fellow musicians in only 3 months time! It goes to show you how active this community really is. That’s why we hope to build long-term business relationships, support wherever we are able and work alongside others with the same common goals.

What is your performance schedule?

BOOKINGS
For the most current show schedule or to purchase tickets,
go online to www.iclegends.com or https://bnds.us/2c7n5x