I am a firm believer that there are people in the world that can create subtle but life changing shifts in energy.  It took only a few seconds for me to realize the Chris Frank was one of these people.  It could have been his easy yet humble smile, or the way he reached out and caressed his wife’s cheek while he spoke.  The subtle familiar gesture giving reassurance as they sat in my office relaying stories of a life full of days spent doing things they love most.  Working in careers they both enjoy and spending time traveling the country on their Harley Davidson.  The energy that Chris brought with him made me immediately know that he made good things happen around him.  I quickly learned I was right. 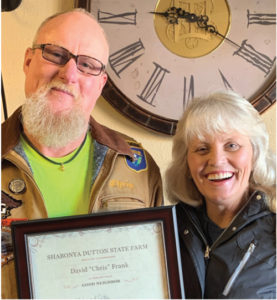 Chris met his wife Tami while they were both living in Reno Nevada in 2010.  They met through an online dating site and have been together ever since.  The couple got married in 2012 after they moved to Elko where they began working for Newmont Gold Corp.  It is here that they have had careers for the last eight years and have enjoyed every minute of it.  This is not new territory for Chris though.  He has been a member of Operating Engineers and in the mining industry for thirty years.

Outside of work Chris has a passion for his Harley Davidson.  A testament to this love can reverberates through his telling of the ride he took across nineteen states in twenty one days this summer.  It was all for the 115th anniversary of Harley Davidson and it was a trip he will never forget.  When I asked him what the most memorable moment was he smiled his humble smile and said, “The Ohio River at sunset. It took forever for me to convince these to women to take a picture of me, but I finally did and it was pretty Epic.”  Chris and Tami have made trips to Carlsbad, New Mexico, and then another year down from Las Vegas to Tombstone, Arizona on their Harley.  They make the most of their time off together.

It was during one of these times together around Thanksgiving that a thought started brewing for Chris.  He was watching the devastation for families and all of those affected by the Paradise Fire and he just kept thinking about how they had to be feeling.  He told me, “I’ve never lost everything because of a fire, but I’ve known what it’s like to have nothing.  I knew I had to do something, so I just figured I would ask to community to help and then I would take it to the people of Paradise.”  That is exactly what Chris did.  With help from Tami, their son, and some friends they started putting the word out all over social media.  They parked Chris’s truck and trailer on Lamoille Hwy in front of Elko Vet Clinic and let everyone know that they were collecting items to take to victims of the fire.  At first there were only a few things brought down, but by day three the truck and trailer were over flowing with donations. Chris and Tami were blown away with how generous the community is.  They had everything from brand new bedding sets to a box of 100 t shirts.  Our small community stepped up in a big way.

Chris and Tami then took the truck and trailer and drove it over to Grass Valley, Yuba City and took it to the Salvation Army for Donation so that it could be distributed to Paradise Fire Victims.  It was important to them to be able to take the supplies to a place where the things would be needed.  Grass Valley and Yuba City are areas where victims went to recover and settle after the fire.  The long term thought that Chris put in went a long way.  When you’ve lost everything it means a lot to have a clean place to put your head, or a new clean shirt to put on your back.  That is how we know that what Chris was able to coordinate was greatly appreciated by a lot of people.  It truly is only a piece of his story though.  He has done so much else to give back to others when he can.  He has spent countless hours working at the food bank at St. Vincent’s in Reno in his spare time.  Giving back what he can when he can to those who need it.  Chris is someone who thinks about people and their needs before his own.  An energy that lifts.  Thank you Chris for being a Good Neighbor to not only our Community but every Community.  From all of us at Shabonya Dutton State Farm we appreciate you.

If you have someone you would like to nominate as a Good Neighbor please call Kayla at 775.738.3423 or email Kayla.ozman.waav@statefarm.com