Corvidae is a family of birds that include the crows, ravens, jays, nutcrackers and magpies. Corvids are considered the most intelligent birds that have been studied to date and their intelligence surpasses most mammals. 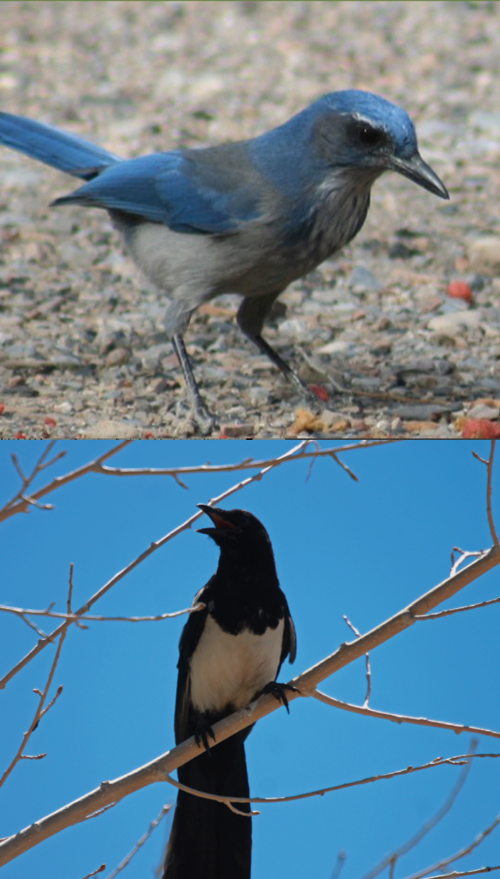 They can recognize people’s faces. Expert John Marzluff and his fellow researchers at the University of Washington set up a study to see if crows could remember human faces. They wore caveman masks while they went to catch and mark the crows. Each time they came back wearing these masks, the crows would mob the researchers and attack them. If they returned with a different mask, or without a mask at all, they were left alone. The researchers continue to test the birds and they still haven’t forgotten – even after a decade.

They are problem solvers. In one study, a crow was given a task to complete that involved eight individual steps that had to be solved in a specific order to release the food reward.  The bird had to collect the tools, then use them to complete the next step of the puzzle. He was familiar with the individual tools, but had not had to combine their use before. The crow completed the task. Crows are known to drop nuts with hard shells into the street and will wait for cars to come crack the shell before swooping down to retrieve the contents.

Seed sorters have huge hippocampi.  The hippocampus is the part of the brain that controls memory. Clark’s nutcrackers have a large hippocampal complex relative to both body and total brain size. They have better spatial memory and do better with tests involving food caching and retrieval. If you can’t remember where you put your food, you won’t be able to eat.

They can ‘talk’. Corvids are very vocal birds, using squawks and knocks to communicate with one another and to outsiders. Birds such as ravens can imitate noises such as computer notifications and water droplets. But they can also imitate human speech. There are ravens at the Tower of London that will squawk “keep the path” to tourists. They can also mimic the sounds of pets like cats and dogs, and predators such as owls.

They use tools. In one study done by researchers from the University Oxford, they placed food inside of a bucket at the bottom of a long tube, making it inaccessible to the hungry crow in the study. The crow first tried using a wire to reach the bucket. When that didn’t work it bent the wire into a hook and use this to retrieve the bucket. Some types of crow use sticks as a means of digging food out of small holes in fallen branches.

They are family oriented. Many species of birds never see their young once they leave the nest. However, crows in America allow their offspring to stick around for years. Often the parents will have more young before their firstborns leave the nest. The older offspring help raise the youngest birds in the nest. They do everything from feeding their mother and the babies to protecting the nest from predators. They will also offer protection for their family members who are out looking for food. These sort of “family values” and loyalty are seldom seen in birds.